Get 5 Ask Instructor questions as a reward
for singing up free today.

Key Words Found in this practice

In this question, you'll listen to a conversation between two people, then answer questions related to that conversation.

You may take notes while you listen. You may use your notes to help you answer the questions.

We recommend you practice taking notes with a pen and paper like you will during your TOEFL exam. 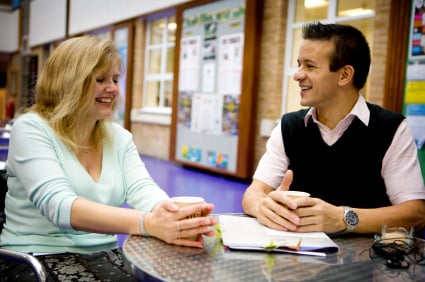 1 Why does the student go to speak to the consultant?

2 Listen again to part of the conversation. Then, answer the following question.

What is the student attempting to express?

3 Why can’t the student join the bicycle club?

4 What kinds of clubs are similar to the bicycle club?

5 Which of the following is NOT a benefit of joining the rock climbing club?

You have seen all of the questions in the listening section.

As long as there is time remaining, you can go back and check your work.

Click VIEW RESULTS to submit your answers and review your work.

Consultant: Good afternoon.  Come on in.

Consultant: So, what can I help you with today?

Student: Well, I want to join the bicycle club.

Consultant: Joining clubs is a great thing to do.  Unfortunately, the bicycle club currently has no events because the office is being renovated.

Student: Oh…well, when is it going to be done?

Consultant: The anticipated date of completion is next semester, though it could take as long as a year.

Consultant: I do apologize.

Student: It’s not your fault, I guess.  Umm…so are there other clubs I can join instead?

Consultant: Absolutely.  There are a wide variety of clubs throughout campus.  Since you were interested in the bicycle club, I would recommend the hiking club or rock climbing club.  They are popular options for students who are interested in exercising and meeting friends.

Student: Those could be nice.  It’s too bad about the bicycle club, though.  But, yeah, those would work.  How about the hiking club, when is it?

Student: That won’t work then.  I have biology class on Friday night.  I didn’t think finding a club would be this hard.

Consultant: Don’t get discouraged.  It’s all about finding the right fit.  In the future, the bicycle club’s office will be finished and they will start up again.  You won’t always have biology on Friday nights either.  What about the rock climbing club?

Student: I do really like climbing.  When is that one?

Student: Okay…okay yeah, I don’t have any class or anything going on then.

Consultant: So you’d like to join the rock climbing club?

Consultant: Alright.  So, the process isn’t too complicated.  You just have to pay the dues, which aren’t very large, and then fill out your contact information and attend the next meeting.

Student: Is it going to be their first ever meeting?  Like, will I be that strange new person that nobody knows?

Consultant: It is not their first meeting, but you really don’t need to worry.  The whole point of clubs is that they’re social and welcoming to new people.  I’m sure you’ll fit right in.

Student: That’s easy to say, but what if I don’t?

Consultant: Well, thinking negatively like that will only hurt your chances.  So first, try to stay positive.  They will probably ask you to introduce yourself, so they can get to know you a little bit and you’ll be good from there.

Consultant: It’s perfectly normal to be nervous.  But remember, everybody there was the new person at some point.  But, if for some reason it doesn’t work out for you, you can always come back to me.  There are plenty of clubs for all kinds of people.  And like I said before, you may be able to join the hiking or bicycle club in the future.

Student: But I should still try this now?

Consultant: Of course.  There are no guarantees and one of the major aspects of college is going out and trying new things.

Submit your listening answers to auto generate this report.

You must complete listening practice first

If your notes were not helpful, think about why they didn't help you. Did you write down incorrect information? Were your notes unorganized? Could you understand them? What could you have written down that would have helped you get the answer correct? Re-write your notes so that they are useful. Repeat these steps until you feel this listening practice's training module is complete.

Listen for the main idea
In most cases, the first question after each lecture is a main idea question also known as a gist question. At the beginning of a listening lecture, the professor usually mentions what the main topic of the lecture will be about, but sometimes the topic might be branched into something more specific. Please note the topic can change, so always be prepared to note down any new topics.

Listen to how ideas are connected throughout the lecture
When listening to a lecture, make note of the way the ideas in the lecture are connected. In other words, how the professor organized the lecture. When you encounter a question asking you how the lecture is organized, you can refer back to your notes. Some of the main relationships between ideas include cause/effect, compare/contrast, and steps in a process.

Listen for key points not specific details
TOEFL listening questions will not test you on small details. For example, you won't see questions that are about a specific year, name, or location. Instead, questions will test your understanding of key points mentioned in the lecture.


Pay attention to the following transition words which can help you capture the main ideas and examples:

NO SKIPPING ANSWERS
Unlike the reading section, in the listening section you CANNOT skip answers and come back. If you skip a question, you will not be able to go back and answer it.

Make an educated guess on questions you are unsure of
When you don't know the answer, try to figure out which choice is most consistent with the main idea of the conversation or lecture. Another way is to eliminate obvious wrong answers.

Here are symbols you can use in your notes:
Other symbols:
star_border
keyboard_arrow_left Prev
Next keyboard_arrow_right
close
X